Despite the existence of multiple application lifecycle management (ALM) frameworks, there hasn’t been a whole lot of progress in terms of applying a lot of discipline to the software development process. In fact, with the advent of agile development methodologies, you can easily see how things are getting worse rather than better. IT organizations are pumping out more code than ever. But more code is not necessarily better code, which means many IT organizations are simply as inefficient as ever, just at a much higher level of scale.

To try and address this issue across the ALM space, Tasktop Technologies today at the EclipseCon Boston 2013 conference announced a new Software Lifecycle Integration (SLI) initiative that provides a framework for unifying the fragmented development processes that organizations inevitably encounter when trying to deliver massive amounts of software at scale. 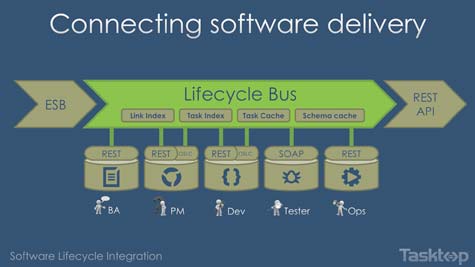 Kersten says the end goal is to make it much simpler to integrate different ALM tools using a common set of schemas. In contrast, Kersten says what exists today is a lot of point-to-point tool integration that simply doesn’t scale in the age of agile development.

As a provider of ALM integration tools, Tasktop obviously has a vested interest in this process. At the same time, however, in an agile development age where many developers have eschewed any consistent management processes in the name of shipping as much code as fast as possible, it’s clear we’re approaching a crisis where many organizations are finding they have become victims of their own success. The challenge, of course, will be finding a way to put ALM processes in place in way that doesn’t constrain the agile development process.

An open source data model for ALM obviously doesn’t solve that problem on its own. But it does set the stage for putting the management processes in place that do.