How to Launch a Successful API

As part of an effort to increase the appeal of its database platform, MarkLogic today announced that the latest release of MarkLogic 8 now supports JavaScript and JavaScript Object Notation (JSON).

MarkLogic CEO Gary Bloom says that while MarkLogic has been able to gain traction in the enterprise as a NoSQL database, support for JavaScript and JSON will make the database more accessible to a broader range of application developers. In addition, MarkLogic is also making it easier to access data in version 8 by adding support for a REST application programming interface (API).

Previously, MarkLogic provided developers with access to an XML construct that wasn’t widely used to access a document database that also uniquely provided the ability to process transactions. With the rise of JavaScript on both the client and server side, Bloom says any developer with those skills can now build applications against the MarkLogic database. As part of the effort to increase awareness of those capabilities, MarkLogic is making a version of its Enterprise NoSQL database platform on Amazon Web Services (AWS) free for one year to new customers.

Other new features in MarkLogic 8 include support for semantic search terms and phrases along with an ability to retrieve documents based on the time they were created and stored. That latter capability, says Bloom, is especially critical in data governance scenarios. 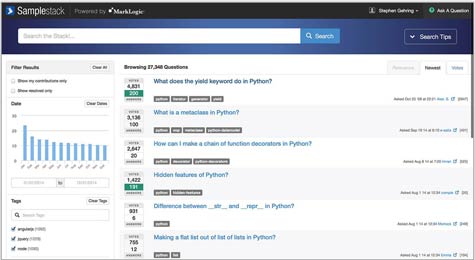 Bloom says as one of a very few NoSQL databases that can support transactions, the MarkLogic database has emerged as a credible alternative to traditional SQL databases in enterprise IT environments that need to deploy mission-critical applications. At the same time, Bloom says that because MarkLogic doesn’t force data to be stored in a column or row format, enterprise IT organizations gain a database that is both much easier to deploy and more flexible in terms of the data formats it can support.

When it comes to NoSQL databases, there’s obviously no shortage of options. But Bloom is betting that once IT organizations realize they can combine all the simplicity of programming in JavaScript and REST APIs with an enterprise-class database, there will soon be a lot more instances of MarkLogic supporting the next generation of mission-critical applications such as Healthcare.gov than most rivals currently expect.