When it comes to application development, time is the root of all evil.

In effect, most businesses today rationalize this state of affairs by determining that their existing developer team is too valuable to pull off the projects they are currently working on. But when those same developers don’t have the time to acquire the skills necessary to master the next generation of emerging technologies, many of them are replaced with new workers that have those skills either because they just learned them in college or were trained to acquire those skills working for an IT services firm that is frequently located overseas. This latter scenario is what contributes so much toward the animosity that surrounds the H-1B visa program.

This situation is becoming especially critical at a time when emerging technologies such as new mobile computing platforms and Windows 7, coupled with the advent of new 64-bit systems running on multicore processors, are about to give birth to a new era of parallel programming. Unless developers find the time to master these new platforms, many of them will find their existing skills will shortly be obsolete.

Mike Rozlog, product manager for Delphi solutions at Embarcadero Technologies, says a lot of these problems stem from the sheer amount of time the developers need to spend coding. He argues that developers have not taken full advantage of all the automation features available in modern rapid application development (RAD) environments. Rozlog said this situation exists because in good times, developers could easily switch jobs without significantly upgrading their skills, and now in a down economy they don’t have the time needed to master every new feature in a development environment.

At the end of the day, developers and other IT professionals need to take responsibility for maintaining their skills. But it’s also increasingly clear that maintaining their skills may require pushing back against employers that at the moment are very keen to get the most out of every developer without too much concern about how those same developers might stay gainfully employed two years from now. And that may mean that no matter what the boss says, you need to work on projects involving the emerging technologies of today so you can sure to be employed tomorrow. Click through for results from a survey conducted by Embarcadero Technologies on current developer trends, challenges and initiatives. 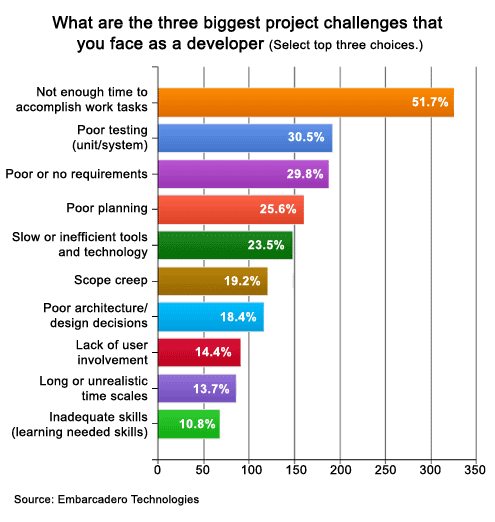 Time is of the essence. Developers are worried that their skills are becoming dated. Parallel computing comes in a strong third ahead of cloud computing. Everything is now all about the touch and feel of the application.