With the rise of Docker containers as an alternative to virtual machines in Linux environments, the way applications have been traditionally managed is now being challenged. Because containers are designed to enable organizations to more easily support thousands of workloads, existing application lifecycle management (ALM) platforms can’t rise to the challenge.

At least that’s the contention of the folks at Shippable, which this week released version 2.0 of its namesake ALM platform that has been specifically designed to support Docker containers.

Shippable CEO Avi Cavale says that given the fact that Docker containers enable developers to spin up thousands of containers, the workflow processes embedded in existing ALM tools are simply not up to the challenge. There’s no doubt that many of them will add support for Docker containers, says Cavale, but Docker containers will require a more agile approach to ALM that can scale well beyond anything legacy ALM tools were intended to handle. 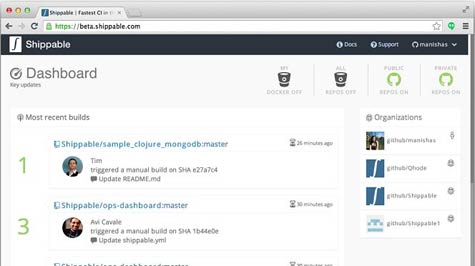 Inside the Shippable platform, code is tested on a personal developer environment that spins up in seconds in a way that accurately replicates the production environment. This approach helps detect errors immediately and reduces reliance on weekly tests to discover virtual machine and physical infrastructure issues. Shippable is integrated with Docker Hub to manage those containers and is compatible with the open source Kubernetes orchestration platform that is being developed under the supervision of Google.

Shippable currently runs on a dedicated host in the cloud, or can be deployed in a hybrid model where containers run on premise. A full private cloud implementation of Shippable is under development.

In general, Docker containers are much smaller than virtual machines, which means that IT organizations that adopt them should be able to run more application workloads per physical server. From an IT operations perspective, Cavale says developers can more easily provision Docker containers themselves, thereby allowing IT operations teams to focus on managing the physical IT infrastructure.

The degree to which the utopian state of DevOps can be achieved remains to be seen. But anything that is designed from the ground up to allow developers and IT operations teams to finally get out of each other’s way is certainly worthy of additional investigation.