As IT environments continue to scale beyond the capabilities of mere IT mortals to manage, there has been a shift toward reliance on IT automation tools.

But one of the challenges that IT organizations frequently have with IT automation tools is a lack of visibility into what is automated and how it is being automated. Chef, a provider of an open source IT automation framework, moved to address that specific issue with the release today of Chef actions, a new capability within Enterprise Chef that allows administrators to “track cookbook usage, roles, environments, and changes to infrastructure” through a single dashboard.

Announced at the #ChefConf 2014 conference, Soo Choi, senior director of customer experience for Chef, says Chef actions is part of a series of upgrades to the Enterprise Chef automation environment that are intended to increase the appeal of the open source IT framework to enterprise IT organizations.

Other new elements of the Chef framework include Chef metal, a tool that automates the configuration of the clusters; the release of Chef DK, a developer kit that makes it easier to bring together multiple open source components for to automate IT functions; and Download and Management, a simplified process for downloading and installing Chef. 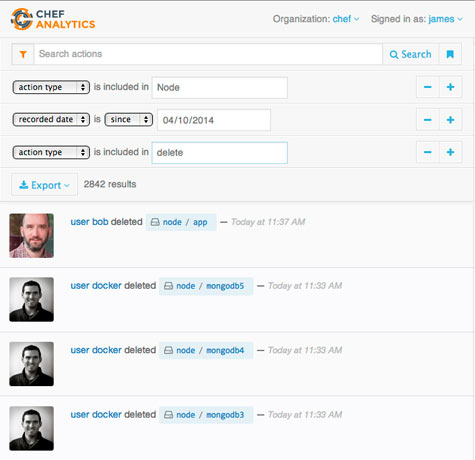 Finally, Chef also announced that Supermarket, the community that Chef established to support users of its IT automation tools, is now open to all users.

As the complexity of IT environments has increased, reliance on IT automation tools has expanded, especially now that variants of IT automation tools are available as open source software. This also helps explain why a fair amount of venture capital funding has been pouring into this space.

While each IT organization chooses to automate functions based on how comfortable they are with IT automation, many of the routine IT functions that once consumed inordinate amounts of time of the IT staff are quickly disappearing within various types of software programs. With these software programs, a new class of developers is finally bridging the divide between developers and IT operations teams.