The growth of data in large-scale enterprise organizations appears to be continuing unabated, with most IT organizations struggling to keep up.

In a survey of 400 IT executives conducted by Sepaton who work for companies that have more than 1,000 employees and over 50 TB of data to manage, 57 percent said their data is growing at a rate of 20 percent or more compounded annually, and 42 percent said they need more than 24 hours to back up their data. That means, said an astonishing 46 percent, that a large number of companies are missing their recovery time and point objectives.

To help cope with these problems, the survey indicates that there is a simultaneous mass migration under way to disk-based backup systems and cloud computing. But 41 percent said they are seriously challenged by budget issues as they try to stem a rising data management crisis.

The results of the Sepaton survey are similar to a survey of mid-market IT executives conducted by IT Business Edge. In both classes of IT organizations, it’s becoming more apparent that while technologies such as data deduplication are helping to stem the rising tide of data, it’s only a matter of time before many organizations are overwhelmed.

According to Jay Kramer, vice president of worldwide marketing for Sepaton, which makes virtual tape library software (VTL) and data deduplication software that is also resold by companies such as Hewlett-Packard, IT organizations as a whole are migrating to disk because it’s more reliable and offers faster recovery times. But many large-scale IT organizations have IT processes that are wrapped up in tape applications, so they need a VTL that allows them to repurpose those processes on disk-based backup systems whether they reside in the cloud or on premise.

Perhaps the most tragic thing about all of this is that 70 percent of the IT people surveyed said that disaster recovery preparedness was their number-one goal for 2010. Given the current state of things, it feels like most organizations are now playing a new form of IT roulette when it comes to disaster recovery.

Click through to learn more about the challenges and goals facing enterprises as they protect their most precious asset. 73 percent said their IT budgets would stay the same or decrease in 2010.

41 percent said budget shortages were the primary reason they were unable to protect data. 75 percent said they had six or fewer FTEs devoted to backup functions. 47 percent said they have more than 200 TB of data to protect.

57 percent said they that data is growing more than 20 percent compounded annually. 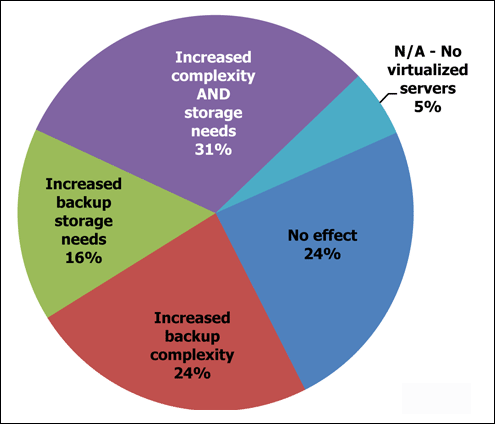 43 percent said they need more than 24 hours to back up their data. 46 percent said they are missing their recovery time and point objectives.

71 percent said they would increase usage of cloud computing services, while 61 percent plan to use less tape for backup and recovery. 70 percent said disaster recovery is their most important goal for 2010.