Quest Software contends that the release of Microsoft SharePoint Server 2010 and SharePoint Foundation 2010 has changed the situation dramatically, for two reasons. First, Microsoft added a great deal of functionality that directly targets the needs of enterprises migrating from Lotus Notes. Second, Microsoft significantly improved the tools for developing custom applications in SharePoint, thus reducing the time and cost required to rebuild applications.

This slideshow highlights 10 aspects of SharePoint 2010 identified by Quest Software that will change the game for enterprises of all sizes who want to use SharePoint to replace or enhance their Notes environments. The first six items are major platform and functionality improvements that Notes people should especially appreciate and that will change their thinking about how applications might be rebuilt. The last four items address improvements of particular interest to developers who want to rebuild the functionality of their Notes applications on SharePoint. Click through for 10 ways SharePoint 2010 will affect your Notes migration, as identified by Quest Software. It is not unusual for Notes databases in large enterprises to contain tens of thousands of documents. Organizations attempting to move this content to SharePoint 2007 ran into some pretty severe size limitations on SharePoint lists and libraries. The most painful one was that only 2,000 documents could be displayed in any one view or folder; if you had 10,000 documents, you had to split them into multiple folders or find another way to balance the load. These workarounds not only slowed down the migration process, but sometimes resulted in a structure that was unusable. Ignoring the limits, on the other hand, as many did, meant risking poor SharePoint performance.

With SharePoint 2010, however, the recommended maximums for many items have more than doubled. Even better, the penalty for exceeding the limits is far less severe: Performance does not drop off dramatically once you exceed the recommended limits, and SharePoint will now automatically throttle certain operations that previously would have brought your servers to their knees.

A more subtle aspect of scalability is the improvements in SharePoint 2010 search technologies. It is now a lot easier to build great search solutions for your users without putting everything in one huge view. This makes it feasible to start separating your content management decisions (how to organize your sites, lists and libraries) from your user interface decisions (how users will navigate the results). Closely tied to the new search capabilities is Managed Metadata. Central to most custom Notes applications are keyword fields, which range from simple pop-up or drop-down lists of terms that users can select from (for example, product codes) to lookups in other views and databases (for example, customer numbers). Some Notes solutions even include custom term-management databases where users could centrally manage the terms, codes, and other resource documents used by other Notes applications.

A powerful new feature of SharePoint 2010 is Managed Metadata (also referred to as Enterprise Metadata). Now SharePoint enables you to manage all the terms that are important to a particular application domain (the keywords, product codes, customer types, document categories, etc.) in a shared term store. SharePoint 2010 includes a complete interface that enables administrators to maintain terms, along with the following features: aliases, translation, context and hierarchy. For the last 15 years, Notes developers and third-party product companies around the world have been trying to achieve good integration with Microsoft Office. These solutions were often expensive to develop, and the results were often unsatisfying, clunky and fragile.

As part of the Office family, SharePoint has always had excellent Office integration, but with SharePoint 2010, things are getting even better. On the top of almost everyone’s list of desired SharePoint 2010 features is collaborative editing of Office documents. For instance, multiple users can open the same Word document and edit it at the same time. Users can see the changes being made by other users almost instantly thanks to a sophisticated change-tracking interface. Behind the scenes, SharePoint is coordinating this interaction between the various users as well as managing the revisions.

Another impressive new feature is the new Office Web Apps. These are completely browser-based versions of Word, Excel, PowerPoint, and other applications that allow users to view and edit documents in SharePoint without having to install Office clients. While these Web editors do not have all the capabilities of their fat-client counterparts, they do cover the needs of most users and allow for many new compelling use cases. 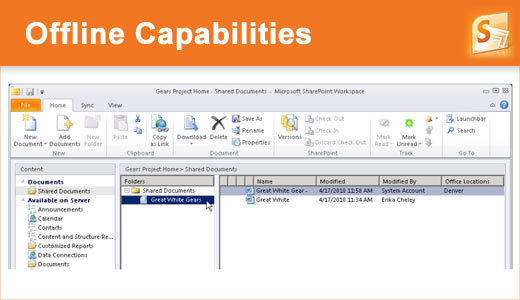 Even though we now count on nearly ubiquitous Internet connectivity and bandwidth, many legacy Notes applications depend on the ability to go offline. Notes has always been famous for its ability to replicate whatever data you needed to your laptop and (assuming your application was designed to work that way) enable you to continue working while unplugged, such as on the airplane, at the customer site, or at the vacation home where you can’t access the Internet.

With SharePoint Workspace 2010, you can synchronize lists, libraries and entire sites to your laptop, use them offline, and then sync up with the site the next time you are connected. This includes not only the data, but much of the logic of the site (including custom data entry forms), resource data (such as Lookup lists that your application depends on) and more. When you click the “Sync to My Computer” button, you can choose to download everything (the default), just the application but not the content, or a customized selection of available content.

SharePoint Workspace includes a lot of smarts about how application functionality should work when users go offline. For example, certain workflow operations will execute only when new documents are posted back to the server. Also, the offline application will try to connect to an online resource that the user decided not to replicate locally (so offline does not have to be all or nothing). 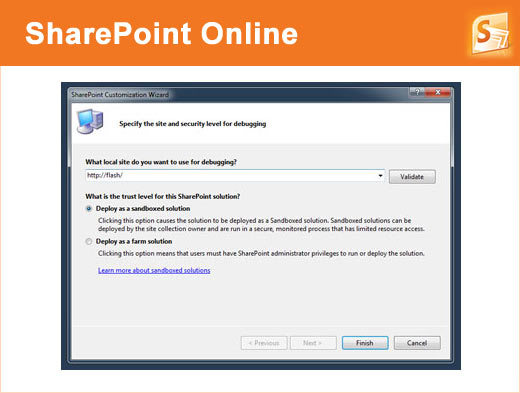 While Exchange Online has been a very popular choice for replacing Notes mail/calendar environments, movement to SharePoint Online has been much slower, for two reasons: In SharePoint 2010, content pages have been greatly improved. In particular, wiki pages are now a very useful way to store rich content. Microsoft basically merged the concept of basic pages, wiki pages and Web part pages into a single construct that is much more powerful and easier to use. Now the rich text editor sizzles. End users can upload images and files and even embed Web parts in their rich content (similar to the way they used to embed OLE objects in their Windows applications).

If you have a Notes application that was intended to manage a bunch of rich text pages, consider migrating them to wiki pages in SharePoint 2010. QuickPlace and Quickr sites are often good candidates for migration to wiki pages. However, if you want to utilize the approval workflows and other features of some of the high-end publishing templates in SharePoint, then publishing pages are still a good choice. Some organizations assume that rebuilding a Notes application in SharePoint will require the same number of hours and lines of code that was needed to create it in Notes. This is far from the truth. The reality is much better: SharePoint allows you to do many things out of the box or via simple configuration that Notes developers had to build from scratch.

SharePoint 2010 offers many code-free development capabilities (in addition to all the new “big ticket” items, such as the Managed Metadata). One that will be particularly popular with Notes developers is the ability to specify simple input validation formulas for individual fields or for the document as a whole, including the messages that should be displayed if the tests fail. You can also add multi-level column indexes, specify which columns require unique values, and even enforce relational constraints between lists. Displaying content per-user or per-location is easier, and the new toolbar makes customizing pages and views easier as well.

Moreover, SharePoint Designer enables you to perform deeper design of your sites, without writing code. For instance, you can design your declarative workflows and define external lists. You can also perform more extensive page customizations, edit master pages, work with complex Web parts, add custom action buttons and much more. SharePoint Designer is now a free download for any developer or power user who wants to customize sites beyond what can be done in the browser, but still without writing code. SharePoint 2010 introduces a great new way to use InfoPath: InfoPath List Forms. This feature allows you to use InfoPath forms as your editor for list items. Now you get the best of both worlds: a lightweight way to store documents with custom schema and a great way to design custom forms for entering and displaying them. All this, by the way, closely mirrors how things were structured in Notes.

InfoPath List Forms rely on InfoPath Form Services, which means that everything runs in the browser. Happily, there have been a number of dramatic improvements in InfoPath Form Services, and the Web experience really is at near-parity with the rich client experience. And there are plenty of other InfoPath improvements that will reduce the cost of migrating Notes applications, including additional controls, more seamless workflow integration, and automatic offline support. Notes workflows are almost always implemented as code attached to various buttons, form events and agents. By contrast, the Microsoft platform encourages the use of declarative workflows — the workflow is expressed as a set of rules that can be entered, modified, and (best of all) understood by a non-programmer. You can write code if you need to, but this code is usually confined to “activities,” the units of action that you wire together in your declarative workflow.

Declarative workflow capabilities have improved significantly in SharePoint 2010. First of all, you get a much richer set of out-of-the-box workflows to use in your applications. This list depends on what edition of SharePoint you install and which SharePoint template you are using, but at a minimum it should include an Approval Process, a Collect Feedback review process, a Collect Signatures review process, and a Disposition Approval workflow for managing content lifecycles. You can now customize the out-of-the-box workflows if needed or design your own from scratch.

If you do need to design your own workflows, you can benefit from the new capabilities in SharePoint Designer. This option was somewhat limited in SharePoint 2007, which forced many companies to use Visual Studio instead, but those days are gone. Now SharePoint Designer workflows can address the need of the majority of the workflows found in Notes applications without having to write code. Notes had a lot of capabilities for connecting to external systems like relational databases and enterprise applications such as SAP and PeopleSoft. As a result, some Notes applications that will be replaced don’t really have much content of their own — they are just front ends for some back-end system.

SharePoint 2007 has a somewhat limited facility for connecting to external data: the Business Data Catalog. In SharePoint 2010, this is replaced by a much more powerful feature called Business Connectivity Services (BCS). You can use this new facility to search, read and write content in your back-end systems. BCS introduces External Content Types, which are basically definitions of where your external data lives and how to read and write entities in your back-end data source.

This feature gets really powerful when you expose this content as an External List. An External List looks and feels like a native SharePoint list, and you can easily include it as part of any SharePoint page. You can design views, display the content in custom Web parts, and even build custom InfoPath forms for displaying and editing data. It really is that simple.