Workato Strengthens Integration via the Cloud

With the rise of so-called citizen integrators in the enterprise, the popular conception is that most of these tools are never going to be handling complex business processes. The folks at Workato would beg to differ.

The latest release of the company’s namesake cloud integration platform adds support for a range of new applications, including Cisco Spark, QuickBase, Marketo, ServiceNow, Blackbaud and Tradeshift. In addition, Workato has updated connectors and templates for Salesforce, Eventbrite, Netsuite, QuickBooks, Infusionsoft, Xero and Zendesk applications, including real-time integrations for several of these applications. All told, Workato claims it has now created over 100,000 automation recipes.

At the same time, Workato has released a Custom Job Reports tools and made available a beta version of a Workato Developer Platform that enables end users to build their own connectors.

Workato CEO Vijay Tella says that rival vendors are deliberately downplaying the capabilities of cloud-based integration services to protect more expensive integration platforms that were originally designed to run on premise. By contrast, Workato was designed from the ground up to enable complex business process integration using a simple graphical user interface that end users can easily grasp. 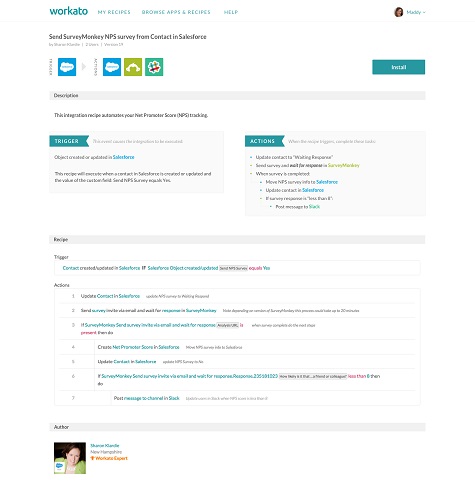 In addition, with price points starting at $99 per month, Tella says Workato is committed to driving down the cost of application integration in terms of time and money spent.

Naturally, in integration in the cloud these days, there’s no shortage of competition. The issuing facing IT organizations now is to what degree they want to enable end users to integrate those application themselves versus adding yet another request to an application development backlog that is already strained to the breaking point.

Previous articleThe Big Picture, and the Small, on Data Center Cooling
Next articleThe Telecom Capex Picture Appears to Be Improving