The time between when a big deal is made and when its impact is felt can be interminable. The deal can go off track and never be completed or, if it is completed, it may be a long time before it succeeds or fails. The initial contract and press release gets things rolling, though, so Nokia’s move to acquire Alcatel-Lucent is a pretty big piece of news.

There was other news and analysis this week as well. Here are the highlights:

This week, Nokia Oyj entered into an all-stock transaction to acquire Alcatel-Lucent that is valued at $16.6 billion (15.6 euros). The combined company, according to Bloomberg, would be bigger than Ericsson AB and Huawei Technologies.

The high-level rationale for the deal makes sense:

The takeover lets Nokia add products used to transmit landline and Internet traffic, giving it a more complete offering to sell to carriers as the amount of data traveling on networks increases with the popularity of Netflix and other video and music services. Devices from cars to refrigerators are also getting connected to wireless networks.

One thing is certain: The industry will have awhile to think about the impact of the combined company. The deal is the biggest since Lucent’s acquisition of Ascent in 1999.

HDMI 2.0 Makes It to Monitors

HDMI 2.0 is a big deal. It offers twice the bandwidth of the earlier iteration of the standard, which is HDMI 1.4. It also enables HDMI to even the landscape with its competitor, DisplayPort.

The story says that HDMI 2.0 had been available on video cards since last year, but not on monitors. This week, however, PCWorld reported that Viewsonic released the VP2780-4K and the VX2475Smhl-4K with HDMI 2.0 ports. The former, according to the story, is aimed at professionals who need extremely accurate color renditions. The latter features two HDMI 2.0 ports.

The good old desktop PC still is the computing device of choice for physicians, according to a poll by YouGov. The organization surveyed 402 U.S. physicians and found that 49 percent use laptops and 23 percent use tablets. Fifty-six percent, however, still use desktops. That percentage is about equal to the 55 percent who still use fax machines. 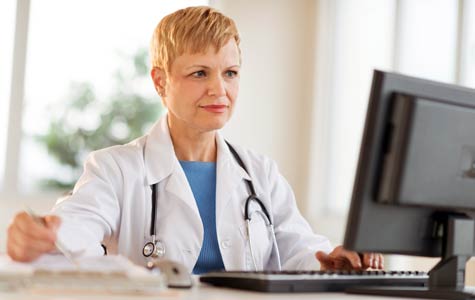 Cloud computing, of course, is becoming ever-more central to the way in which businesses run. The advantages are fairly obvious and extremely well publicized.

A more subtle, though perhaps not completely hidden, advantage is the use of cloud computing as a way to provide disaster recovery/business continuity (DR/BC) capabilities.

Continuity Central advances the idea of using cloud computing to buttress legacy equipment. The DR/BC benefit is noted. In the broader sense, cloud computing provides geographic diversity – having key functions housed in different places – which is a key requirements of DR/BC.

Google to Control Robots Through the Cloud

And, finally, comes a story about clouds and robots. Computerworld reports that Google has gotten a U.S. patent for “methods and systems associated with managing and giving tasks to multiple robots.” Google filed for the patent in February of 2013. The idea behind the patent is to store orders for the robots in the cloud and fluidly assign tasks.

An example offered by Patrick Moorhead, an analyst with Moor Insights & Strategy, is use of the cloud to issue orders to three robots going to a fire. One may be best suited to putting out the fire, a second to saving the people in the structure, and the third to getting the injured to the hospital.

The story says that Google also received a patent that is aimed at providing robots with personalities.