IBM is working with Intel and HyTrust to provide a means of locking down VMware virtual machines on IBM Cloud.

At the IBM InterConnect 2017 conference this week, the three companies unfurled IBM Cloud Secure Virtualization, which makes use of Intel Trusted Execution Technology (TXT) on x86 servers to lock down a VMware virtual machine. John Considine, general manager for cloud infrastructure at IBM, says IBM has been offering this capability on physical servers. But now with help from HyTrust, IBM can extend Intel TXT all the way up to the virtual machine itself.

Considine says partnering with HyTrust is critical because it enables IT organization to implement a consistent set of security and management polices across a hybrid VMware cloud environment.

VMware has partnered with both IBM and Amazon Web Services to create those hybrid clouds in addition to building its own cloud service. In addition to being available today, Considine says that support for Intel TXT means IT organizations can be certain that their virtual machines are running in one specific location. That is crucial when it comes to passing an audit associated with any number of compliance regulations or laws involving data sovereignty, says Considine.

“Companies need to be able to geo-lock their data,” says Considine. 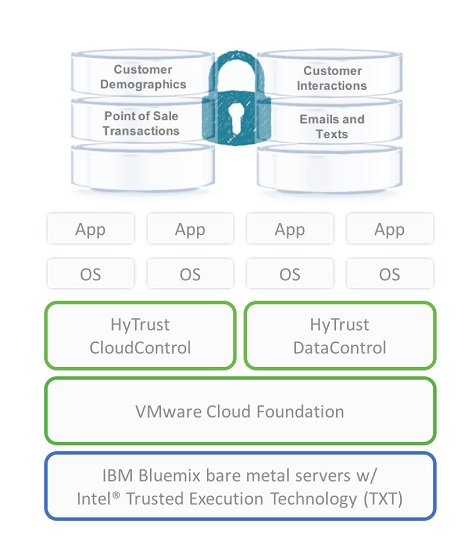 IBM is betting that as more enterprise IT organizations look to public clouds to host instances of VMware, the ability to specify where those machines are located will push many of those organizations toward an IBM cloud. Of course, it remains to be seen what AWS will ultimately offer once its alliance with VMware starts to bear fruit. But for now at least, any IT organization that needs to lock down a VMware virtual machine running on a public cloud to achieve compliance will need to be sure whether Intel TXT is available or not.