Eight Fundamentals of Enterprise IT

Truth is a funny word. It smacks of empirical fact and righteousness.

But truth is not that. It’s subjective — a cocktail of knowledge, experience, context and bias. Jake Sorofman, chief marketing officer for rPath, admits that an attempt to generalize “truths” about a topic as broad and complex as IT has the potential to come across as presumptuous … or worse!

But, if you look closely, complexity often betrays patterns. For him, these patterns tell a story that gets — if not to the ultimate kernel — in close proximity to the truth.

The following are the eight truths of enterprise IT, from Sorofman’s perspective. 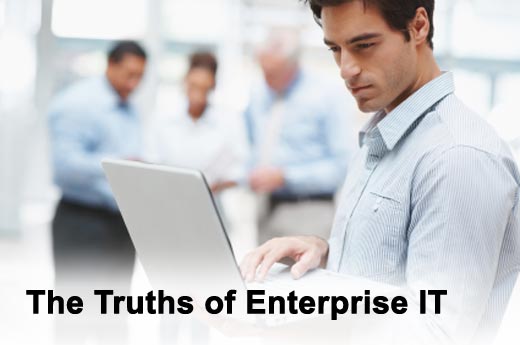 Click through for the eight truths of enterprise IT as outlined by Jake Sorofman, chief marketing officer for rPath. 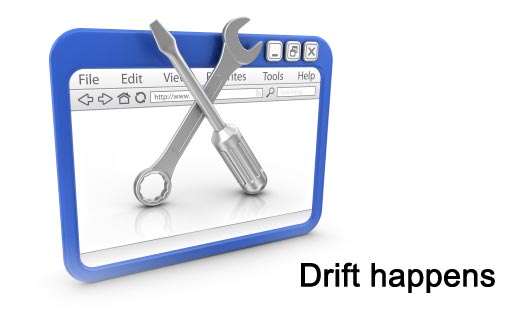 Complex software systems are rarely consistent or what they ought to be. They drift and morph in definition over time as patches are applied, updates are made and IT personnel tunes, tweaks and fiddles. These changes are typically untracked, and IT rarely knows precisely what is running. When they’re initially deployed, systems are opaque. Over time, they’re complete mysteries. IT fears and avoids change because of a Law of Unintended Consequences that hangs over the data center. At the heart of this law is the reality that deployed systems and their dependencies are poorly described and documented. When change happens, stuff breaks. This is why, on the topic of change, IT tends to channel Ross Perot: “If it ain’t broke, don’t fix it.” As the cost of computing drops, workload demand increases. This is the force behind VM sprawl and the attendant growth in management costs. Like nature, IT abhors a vacuum. When space is made available, it’s quickly filled in. (Perot may call this “a giant sucking sound.”) 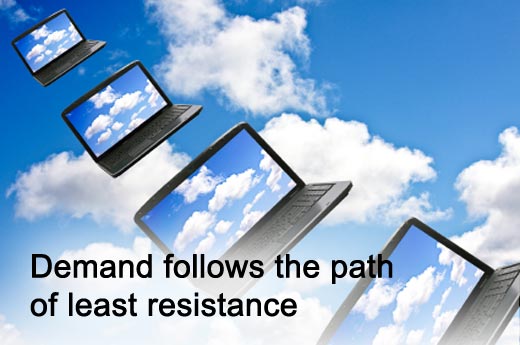 Like it or not, enterprise IT competes with a marketplace of alternatives. When alternatives offer comparatively better options in price, performance and availability, workloads will follow the path of least resistance. Public cloud is a perfect example of this phenomenon at work: IT organizations that fail to transform will surely watch in vain as workloads, following the path of least resistance, escape to the cloud. Software is more diverse than ever, comprising an unthinkable array of custom, commercial and open source options. This means that developers have more resources to ply their craft, and IT is utterly mired by complex, interdependent and constantly changing systems. It’s made worse by the ongoing abstraction of IT, from managing discrete single-use piece parts to the composition of reusable services. The network of interdependency is massive and — much of the time — poorly understood. Each subsequent architectural advancement leads to an increase in scale. Scale exploded as mainframe gave way to client-server and client-server gave way to Web. Today, we’re seeing x86 architectures, virtualization and cloud are all driving growth in the volume of systems that need to be managed. Operating budgets cannot keep pace with growth in IT scale, so even when the top-line budget is growing, the budget per managed system is always contracting. IT will always be forced to do more with less — forced to find new ways to change the economics of scale. When IT complexity reaches the frontier of existing tools and processes, IT must reinvent. Containing complexity is like holding back a tide. The only way forward is through reinvention, embracing new tools and approaches for dealing with IT complexity at scale.