2013 has seen some massive outages. And given our heavy reliance on technology today, there is more at stake than ever before. Outages affect not only internal users, but a company’s customers and partners – and impact revenue, credibility, trust, reputation and productivity.

With all of this in mind, Neverfail wanted to put together its own list of the year’s top outages – placing them on a scale based on overall impact of their downtime. The criteria used to assess the scale ranges across multiple factors:

Expansive reach – Businesses increasingly depend on the cloud for applications and access to data, so there’s more at stake today than before. In today’s interconnected world, an outage can have a rippling effect across a company’s user base, the country and even the globe.

Damaged reputation – No one is perfect. But as customers become increasingly dependent upon the cloud for applications and access to their data, perfection is exactly what those customers demand. So, big outages draw a lot of media attention and can quickly put a company under attack. Not to mention the fact that user forums and social media platforms like Twitter have become the automatic and all-encompassing soap box for all irritated customers to expound on their complaints. Companies that rely on other cloud platforms to provide their own products and services may also see their reputation adversely affected if the cloud provider has an outage.

Lost revenue – It is nearly impossible to determine the exact cost of downtime, since so much depends on the organization, the industry, the number of people impacted, etc. For example: A Standish study estimated that credit card applications lose around $2.6 million for every hour of downtime, whereas this year’s 49-minute Amazon.com outage reportedly cost the online retail website nearly $5 million in deferred revenue.

It also appears that the cost of downtime is increasing. According to Gartner, in 2005 organizations lost $42,000 every hour of downtime. In 2011, it was estimated that IT downtime costs $26.5 billion in lost revenue each year and another study suggested that the average cost of data center downtime across industries is approximately $5,600 per minute.

By that estimate, the top 10 outages equal a whopping $31,214,400 in lost revenue – and that only accounts for the providers themselves, not their end customers. Ouch!

This slideshow summarizes the top 10 outages identified by Neverfail. We actually reviewed over 30 major outages; we’ll publish that list and some additional analysis next month. Click through for the top 10 online outages of 2013, as identified by Neverfail. 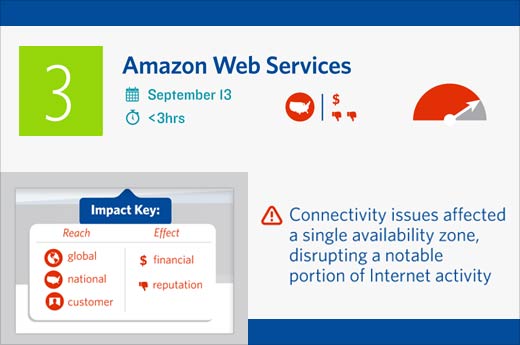 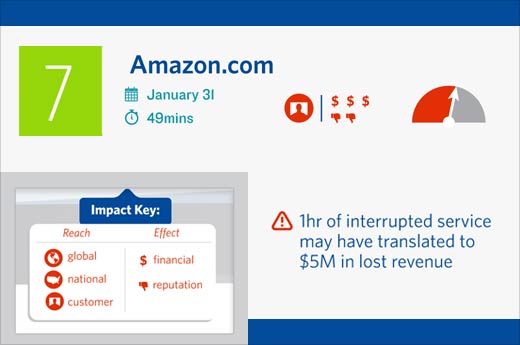 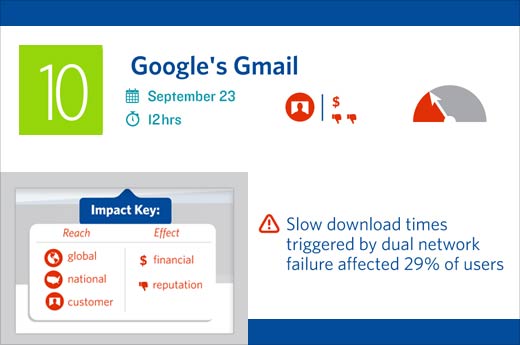 While the index measures through the end of November, the very recent Yahoo Mail outage deserves a considerable honorable mention: