7 Characteristics of a Data-Driven Organization

While the Internet of Things (IoT) is surrounded by a lot of exuberance, IT organizations will need to address many tactical issues before IoT applications become an everyday reality. At the top of that list are data compression and connectivity.

To address those issues, WindSpring next month will unveil SpringBoard, a platform through which organization can seamlessly connect to any IoT device regardless of the network protocol that device recognizes and then compress and convert the data generated by the device into a common format.

WindSpring CEO Tom Hunt says IoT devices by definition are going to have limited compute and storage capabilities. As such, most of these devices are going to be generating massive amounts of data that will need to be stored and processed elsewhere. Finding a way to efficiently accomplish that task will be crucial for IoT success, especially when you consider that on any given day an IoT device might be accessing multiple networks depending on the cost of available bandwidth, says Hunt.

The SpringBoard Intelligent Compression application programming interfaces (APIs) first compact the data on the IoT device and then make use of compression algorithms to encode as little actual data as possible. The result is compression rates as high as a factor of 20, dramatically reducing the bandwidth needed to be consumed by an IoT application, says Hunt. 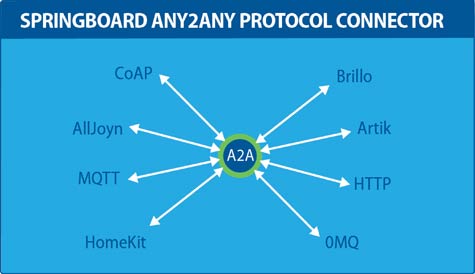 At the same time, Hunt says it’s unlikely that IT organizations will always be able to dictate which network protocol a particular IoT device will use. For that reason, Hunt says WindSpring decided to develop a SpringBoard A2A (Any-to-Any) Protocol Connector to enable seamless real-time, bi-directional communications. Hunt says the protocol converter receives device data in any protocol and translates it on the fly into the required network protocol, then sends it on in real time.

Clearly, IT organizations will need to address a lot of IoT challenges in the months and years ahead. But at the most fundamental level, IoT is about moving data around a distributed set of networks. Without an ability to address that fundamental requirement, all the IoT enthusiasm in the world isn’t going to amount to very much.