Xplenty is officially in the integration business — and it’s using Hadoop’s processing power as its foundation.

The Tel Aviv start-up originally entered the crowded Hadoop-as-a-Service market. That made companies like Amazon and AltiScale its main competitors. But those companies are essentially providing Hadoop tools and the infrastructure, which means you need to know MapReduce coding to use it.

Xplenty differentiated in that it provided a tool for the ETL data processing, including pre-built connectors, and its graphical user interface abstracts the integration, allowing you to simply drag and drop data sources and transformations. That eliminated the need to know how to code with MapReduce — and Xplenty’s customers appreciated that more than anything, it seemed.

After watching how its customer base used the solution, the company decided to shift course and focus on selling its ability to integrate the data and prepare it for analytics. In other words, it’s bypassing the administrators and appealing straight to the data and analytics users.

“It’s essentially the same product. We started out positioning ourselves as simply Hadoop-as-a-service because we thought people were interested in using Hadoop as a technology — and add to that the fact that Hadoop is complicated and there are not enough Hadoop skills out there. We wanted to breach that gap between the technology and the user,” said Xplenty co-founder and CEO Yaniv Mor. “What we found out is actually people — especially the data people, the BI people — don’t actually care much about technology, they care about the application. They care about what they can do with the technology.”

Users still benefit from the Hadoop, which provides a scalable foundation for the processing engine, of course. But the selling point is the integration — and that’s resonating well with Xplenty’s target audience, he added.

Right now, Xplenty’s 20-company user base is from the online verticals, primarily in gaming and e-commerce. The typical use case is moving data between cloud solutions, often from Amazon to Rackspace or an analytics tool, but the solution can also handle on-premise to cloud as well. The solution can handle data from multiple data stores, including NoSQL, HDFS, SQL, log management software and cloud storage. While the data processing is currently batch-mode MapReduce, the company plans to add Spark and Tez to support more interactive processing some time this year. 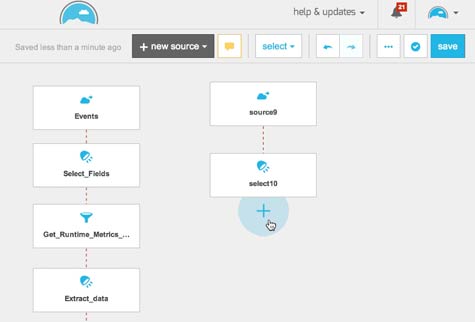 Of course, this puts Xplenty in competition with a whole new batch of vendors, such as Pentaho, Talend and integration powerhouse Informatica. All offer integration on Hadoop, but the main difference is that Xplenty is native to and optimized for Hadoop. A 451 report provided by the company notes that DataWorks and Trifacta’s Data Transformation Platform may emerge as potential competitors.

Xplenty offers a full-feature seven-day trial that is restricted only by data size. The company offers three fixed-rate monthly plans based on the size of infrastructure, and customers also pay for the computing power used by time (i.e., two hours would cost less than 24 hours).

Generally, the price ranges from a few hundred to a few thousand dollars, he said. With that, customers also receive consulting help from the company for the initial implementation.

“Data and BI people are spending 80 percent of their time just crunching the data and only 20 percent doing analysis,” Mor said. “We are trying to change that.”