Earlier this year, Sisense showed how a business intelligence application could be accessed using a variety of new classes of user interfaces such as Alexa from Amazon or Siri from Apple. Today, Sisense announced that it has developed bot technology as part of a Sisense Everywhere initiative that allows its BI application to respond for requests for data within the context of a conversation occurring within a modern messaging platform.

Guy Levy-Yurista, head of product at Sisense, says that because Sisense developed its own In-Chip Data Engine, it has access to the processor horsepower needed to employ bots to drive an artificial intelligence (AI) technology capable of responding to verbal queries within its BI applications. Sisense is now making that capability directly accessible from within messaging platforms such as Skype, Facebook Messenger and Telegram.

The Sisense bots essentially keep track of conversations and calendar appointments within those environments. The Sisense bot has already assembled all the relevant BI data available that relates to those discussions, which it can then make available to end users on demand. Sisense bots have not reached the point where they will inject themselves into a conversation. But Levy-Yurista says Sisense has the access to the processing power needed to make that happen next.

“We have 100 times the processing capability you would find in a general-purpose processor,” says Levy-Yurista. “It would take seven generations of processors for them to catch up.” 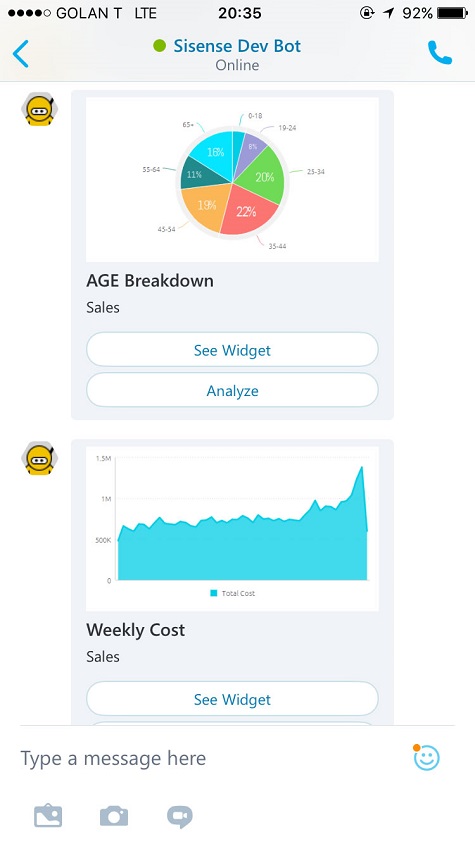 Levy-Yurista says that in terms of how individuals communicate within organizations, it’s apparent that a variety of applications are starting to eclipse traditional email. The opportunity now is to leverage bot technologies to allow BI applications to directly interact with users on those platforms via the open application programming interfaces (APIs) they have published, says Levy-Yurista.

That capability, adds Levy-Yurista, should increase the number of end users of BI applications by several orders of magnitude.

It’s clear at this point that bots, when combined with various forms of AI, are about to transform how end users interact with applications. It may take a while for that transformation to play out. But the one thing that is for certain is that the relationship between humans and machines will never be the same again.