As larger amounts of Big Data become more accessible with each passing day, finding ways to analyze that information is becoming a higher priority for organizations of all sizes. But as is often the case with large amounts of information, a picture is often worth a thousand words.

Mani Gill, vice president and general manager of SAP advanced analytics, says that when it comes to analytics people and processes are the most overlooked aspects of these projects. Most of the data that needs to be analyzed is isolated across multiple silos and even if people can access it, there is no easy way to visually inspect that data. 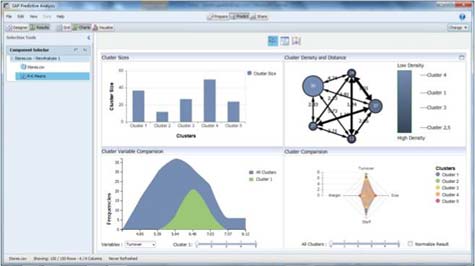 With the latest release of SAP Predictive Analysis software, Gill says SAP has embedded all the visualization tools required to analyze models of complex data sets that are now substantially easier to model. To accomplish that goal, the latest version of SAP Predictive Analysis software embeds the SAP Visual Intelligence software in the application while simultaneously adding support for the increasingly popular R programming language.

While SAP Predictive Analysis software can be deployed in a stand-alone fashion, Gill says SAP views SAP Predictive Analysis software as one of the primary applications that will drive adoption of the SAP High Performance Analytics Appliance (HANA) platform. As an in-memory computing platform, Gill says HANA is ideally suited for running predictive analytics applications in real time.

There’s no doubt that the combination of Big Data, analytics and in-memory will transform the way organizations thinks about the value of data in 2013. In fact, it’s the organizations that collectively master these three IT technologies that are going to achieve a sustainable competitive advantage over rivals that fail to keep pace or simply don’t have the resources to keep pace. Of course, gaining the advantage will require a significant investment. The only thing that by comparison would ultimately prove to be more expensive would be failing to make that investment at all.

Previous articleA Snapshot of Tablets @ Work
Next articlePerks vs. Company Culture, and How to Tell the Difference