As part of an ongoing effort to make business intelligence (BI) and analytics applications more accessible, SAP at the Gartner Data & Analytics Summit announced that is has added support for natural language queries and “smart discovery” of patterns to SAP Analytics Cloud.

“It makes it easier to create what-if simulations,” says Smith.

Smith says SAP is committed to democratizing access to analytics applications in the cloud. As part of that effort, SAP currently has an early prototype of a voice-enabled analytics assistant that would leverage the natural language capabilities SAP has embedded in its applications, says Smith.

SAP continues to make a case for rationalizing BI and analytics platforms that are typically strewn across the average enterprise. Most of those platforms have been acquired by line-of-business units that grew frustrated with the depth of the analytics modules made available by providers of ERP applications. But as applications shift toward in-memory databases running in the cloud, SAP sees an opportunity to make a case of eliminating departmental BI and analytics applications in favor of cloud-based applications that make it simpler to both aggregate enough data to drive AI models and analyze data in real time.

As part of that effort, SAP this week also revealed it has added more than 100 new data sources to bring the total number of data sources that can be instantly accessed to more than 250. SAP also says it has enhanced live connectivity it makes available to access SAP BI and marketing applications, data warehouses and HANA databases. 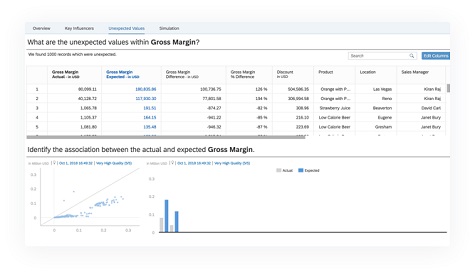 It remains to be seen how successful SAP will be in making that case. SAP claims it has over 2,400 customers now using SAP Analytics Cloud. That doesn’t necessarily mean everyone in those organizations has given up using a BI or analytics application running on a local server. But it does mean the pressure from the internal IT teams to get rid of those applications and systems is considerably higher than it once was.