The drive to automate a wide range of business tasks using robotic software accelerated today with the announcement of an alliance between Accenture and Blue Prism, a provider of enterprise robotic process automation (RPA) software.

Blue Prism CEO Alastair Bathgate says the company has already installed its RPA software within over 150 organizations, including 40 engagements with Accenture. The deal with Accenture is a sign that robotics software is finally ready for mainstream adoption, says Bathgate.

“Two-thirds of those deals have come in the past year,” says Bathgate.

Built using a Microsoft.Net framework, Blue Prism RPA software presents business users with a graphical interface they can use to interconnect discrete processes, says Bathgate. Blue Prism then generates the logic required to integrate those processes using a low-code programming model that enables robotic software to mimic a process that previously would have required a human to perform.

In most cases, Bathgate says, Blue Prism is being used to automate repetitive tasks in regulated industries that need to be able to document how a specific task is handled repeatedly. But rather than eliminating workers, Bathgate says most organizations employing Blue Prism are reassigning human workers to handle other tasks, enabling the business to scale higher than it would otherwise be able to do relying solely on humans to perform every task. 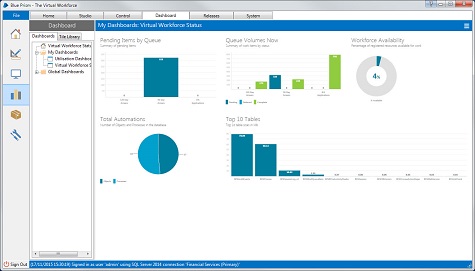 Bathgate says the degree to which Blue Prism represents a form of artificial intelligence (AI) being introduced into the workplace is in the eye of the beholder. Blue Prism does not yet make use of machine learning algorithms or other forms of cognitive computing. A robot created using Blue Prism can perform a function, but exceptions to a process still need to be routed to a human. Any changes to the programming model need to be implemented by a team of business and IT professionals working collaboratively.

In some instances, Accenture will provide that expertise. In other cases, Accenture might make use of Blue Prism to facilitate the outsourcing of an entire business process using a combination of people and robots. No matter what that approach, however, it’s now only a matter of time before most repetitive tasks are automated using some form of bot technology.

The challenge now, says Bathgate, is not so much determining which processes to automate, but more importantly, figuring out how to reengineer the entire organization around a mix of tasks performed by robotic software and humans working together in a way that should ultimately provide more value for all concerned.