No one knows how 2016 will play out, but it’s quite clear that companies that focus on creating value; on maximizing resources, people and time; on pushing the boundaries of innovation; and on using data to run their business smarter will have the agility and flexibility to manage through whatever will come.

This is an exciting time to be in enterprise software. With the cloud and software as a service, we have a new chance to get it right. Buyers are increasingly interested in considering cloud options, and dozens of exciting new companies are reaching scale and giving incumbent vendors a run for their money. In this slideshow, Rob Bernshteyn, CEO, Coupa, has identified six enterprise software trends he expects to see in 2016. 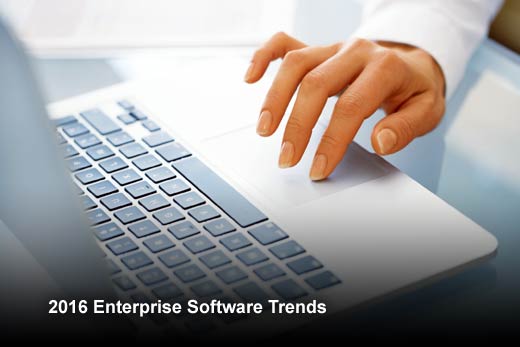 Click through for six enterprise software trends expected in 2016, as identified by Rob Bernshteyn, CEO, Coupa. With the cloud and software delivered by subscription, power is shifting from vendor to customer. Multi-year contracts are out. Vendor accountability is in. Customers have a new bill of rights: to get quantifiable business value from solution providers. Now that virtually all enterprise software is either cloud-based or has the option to be hosted in the cloud and delivered as a service, the conversation will shift away from how the software is delivered and refocus on the value the software is delivering — whether in the form of savings, lead generation, revenue improvement or operating efficiency. It’s no longer software as a service; it’s value as a service. Disappearance of the User Interface

Software that can maximize human experience, insight and creativity by automating even the smallest routine tasks is the new frontier. The Holy Grail is to have no user interface at all. Using geo-location technology and Big Data, software can now track people, understand what they’re doing, and push them data-driven alerts and recommendations based on time of day and location. Soon, it will be almost as if software can read people’s minds, delivering what they need in the moment, without having to search and click. We’ll also see continued improvements in the ability to interact with systems via voice. Employees will become exception handlers, interacting with systems only when they need to solve a problem or do something that only a human can do. Gartner has called out 2016 as the year that on-premise ERP implementations are relegated to legacy status. Rather than rip and replace these systems, companies will seek to wring a few more years out of them by building out a cloud-based ecosystem around them in the areas of CRM, HR, and spend management, to name a few. By 2020, we may start to see total system replacements, but this will be the most common path forward for the foreseeable future. Companies that took to the cloud early have now accumulated large stores of data, and are well positioned to use Big Data technology to gain insights into new areas to optimize for efficiency, or even opportunities to create new revenue streams. These early adopters should already be enjoying greater agility and possibly improvements in revenue and cost containment relative to competitors who haven’t made the leap to the cloud. They should be well positioned to use data as an accelerator to propel them past competitors weighed down by legacy systems. Cloud deployments will grow not only in number, but also in size and scale. They will become the accepted solution for postmodern ERP. Early adopters will continue to grow their deployments. And, as these solutions mature and show quantifiable value, we’ll also start to see laggards jump on board, as well as very large enterprises that never previously considered cloud as an option. We’ve seen seven years of economic expansion and loose monetary policy, but the recession of 2009 hasn’t entirely disappeared from the rear view mirror. Global terrorism is on the rise, as is global warming. Some are predicting continued expansion; others dire collapse. Coupa is predicting that those companies that remain careful in their spending in 2016 will be in a better position to weather any economic turmoil should that come to pass.