Starting this summer, SugarCRM plans to begin shipping an upgrade to its namesake customer relationship management (CRM) application that can not only be deployed on a variety of mobile computing devices, but it also allows salespeople to more readily discover relevant customer information inside and out of the CRM system.

According to SugarCRM CEO Larry Augustin, SugarCRM 7, which was previewed today at the SugarCon 2013 conference, is intended to make it a lot easier for salespeople to be better informed about not only what customers bought, but also their interests. Part of the overall trend towards the development of social CRM applications, SugarCRM 7 is designed to provide updates to customer records and account information in real time. 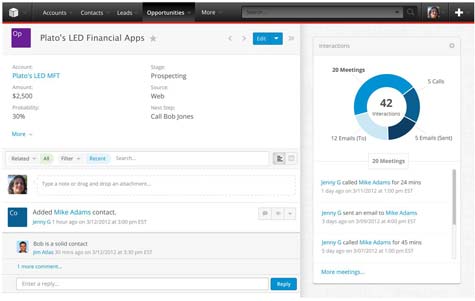 In addition to previewing version 7 of the open source CRM application, the company this week also announced that it is making a version of its software available as a private cloud that is managed by SugarCRM. Augustin says customers and channel partners that don’t want to have to invest in IT infrastructure have been asking SugarCRM to make its application software available in a single-tenant cloud.

Augustin says the most efficient way to breach that divide is to create a billings module with the CRM application that becomes the purview of the finance department. That way, finance gains visibility into the business without having to abandon the system of record, which is based on a general ledger application.

Whatever the approach, IT leaders are increasingly being tasked with solving the problem. The degree to which this problem is an IT or workflow process issue will vary by company. But the one thing that is for certain is that it’s become a major inhibitor to senior level executive visibility and overall productivity.

Previous articleTen Best Practices for Securing Sensitive Data in Hadoop
Next articlePatch Tuesday Not Too Taxing for IT This Month, Despite Heavy Patch Count