How to Evaluate Predictive Analytics for Your Business

No doubt, at this point, IT as a whole is on the cusp of a major revolution involving artificial intelligence (AI). While AI concepts have been around for a while, advances in inexpensive compute capable of processing vast amounts of data are now making it economically feasible to broadly apply AI.

Today, Salesforce illustrated that point with the launch of Einstein, an AI platform designed to layer on top of the company’s namesake customer relationship management (CRM) software delivered as a service.

John Ball, general manager for Einstein at Salesforce, says Einstein is the result of a series of investments Salesforce has made over the last few years that is culminating in a platform that can make more intelligent recommendations and ultimately automate entire business processes. In essence, Salesforce is using the metadata it collects to create models that over time learn how to optimize a specific set of processes based on the outcomes of previous interactions.

Einstein employs a combination of machine learning, deep learning, predictive analytics, natural language processing and advanced data discovery to more accurately predict, for example, what any given customer may be in the market for next or which specific sales leads have a high preponderance of closing within a specified period of time. 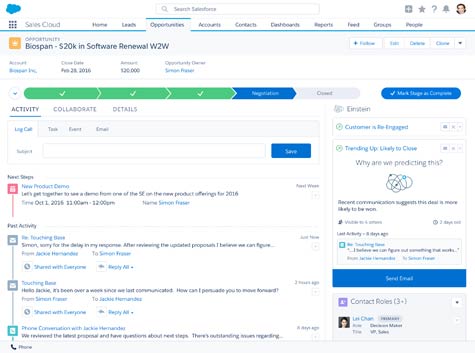 Salesforce intends to make Einstein available as a service that end users invoke as well as a capability that third-party developers can invoke to build applications on top of Salesforce. Unlike more horizontal approaches to AI, such as the IBM Watson platform, Ball says Salesforce intends to focus Einstein on CRM-related applications. In so doing, Ball says, Salesforce expects to bring the benefit of AI to the average end user more quickly than other AI platforms that require massive amounts of effort in custom development to create an application. In the case of Einstein, Ball says, developers will be able to use the standard portfolio of Salesforce Lightning developer tools to quickly build an AI application.

“We want to make the benefits of AI available to all skill levels,” says Ball.

While still in its relative infancy, concerns have emerged that the amount of expertise required to master AI will lead to an uneven business playing field. Only organizations with substantial economic resources can really afford to deploy AI applications that cost millions of dollars to build, deploy and continually maintain.

For the immediate future at least, Ball says, when it comes to AI as a whole, Salesforce will stick to its CRM knitting. But Salesforce already has a substantial footprint in marketing, social networking, service desk and, more recently, Internet of Things (IoT) applications that Salesforce tends to view as being part of the larger CRM ecosystem. Salesforce today also revealed the existence of a new Salesforce Research Group. In addition, many of the services that Salesforce is making available as part of Einstein will reside on the Heroku platform-as-a-service (PaaS) that Salesforce owns. How third-party developers make use of services such as predictive vision and predictive modeling may be difficult for Salesforce to limit to CRM.

Regardless of the approach, the one thing that is for certain is that all the data that organizations collect across millions of interactions with customers is, for better or worse, about to become a lot more actionable than almost anyone ever imagined.