E-Commerce: 5 Strategies to Drive Revenue over the Holidays

A bot at its core is a piece of software capable of performing the same repetitive task multiple times over. While bots are not necessarily a new idea, coupling bots with natural language capabilities and advances in machine learning algorithms is making it possible for bots to take on more human-like attributes. The next big challenge will be getting all the various bots that are being developed for various platforms to interoperate with one another.

Message.io CEO Tom Hadfield says the alliance with Microsoft is the first of several instances where Message.io expects to enable bots to be deployed across multiple collaboration frameworks.

“The idea is to build once and be able to deliver everywhere,” says Hadfield. 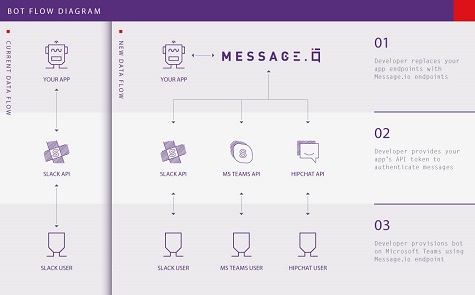 As bot technologies continue to evolve, Hadfield says it’s now only a matter of time when we’ll see the relationship between humans and machines fundamentally change. Today, a machine waits to be engaged by a human. In the near future, bots will have advanced to the point where they can deliver relevant information to an end user without having to be prompted.

The degree to which individual end users will be comfortable with that idea may vary. But the one thing that is clear is that bots will soon be part of the conversation regardless of how much anybody may want to listen to what they have to say about the subject at hand.