Hewlett-Packard today unveiled a bevy of new displays, including an HP Zvr Virtual Reality Display that is designed to make it simpler to explore content using 3D glasses and a stylus.

In addition, HP introduced its first curved display, which serves to increase the overall field of vision when working with graphics applications or viewing video, and a raft of Ultra High-Definition (UHD) displays that support both 4K and 5K screen resolutions.

Alois Bonnet, global display product manager for HP, says that as workstations become more powerful thanks to increased amounts of memory and the latest generation of Intel x86 processors, it’s becoming much more feasible for organizations to embrace 3D applications.

While usage of such applications is still relatively small, Bonnet says that 3D applications will become more widely used. In addition, many of those 3D applications can now more easily invoke compute resources in the cloud. 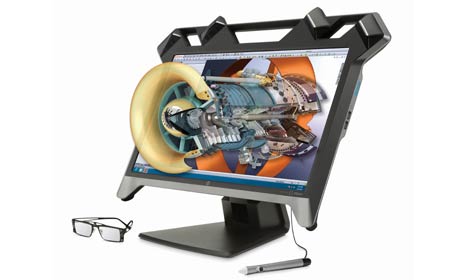 Meanwhile, Bonnet says curved displays will become more widely used in everything from gaming applications to kiosks because in addition to providing greater visibility, they provide a sleeker, more modern looking design.

While 3D applications running on the HP display are not touch-enabled yet, it’s becoming clear that the depth of the interactions that people can have with engineering and scientific applications in particular is about to increase substantially. What will be more interesting to see in the fullness of time is how access to 3D applications leads to innovations that previously would either not have been possible or simply too cumbersome to discover using traditional two-dimensional displays.

Pricing for the HP 3D displays will be announced this spring. Pricing for the rest of the new HP displays ranges from $399 to $1,299, depending on screen size and resolution provided.