How to Create an Optimized Calling Strategy

Many considerations go into making a sales call, from knowing buyer value to understanding where they are on the path to purchase. More often than not, what’s missing is knowing the best time to reach a prospect over the phone to increase the chances of having a live conversation and, ultimately, nurturing a lead.

Analyzing call answer rates – the probability that a person answers a call – from multiple perspectives, including geographic location, response to known vs. unknown numbers, time of day and day of the week, can reveal ideal times* for businesses to call prospects and generate qualified leads. Knowing and understanding these ideal times can mean success or failure for a business.

To better understand these trends, ThinkingPhones, an innovator in developing mobile-enabled, analytics-driven business communications, recently published a study, “Answer Rates in the US: Knowing When to Call,” to help organizations understand the nuances of a phone call as a means to learn when a call can have the greatest engagement and impact. The report examined over 25 million inbound phone calls in the United States.

*The times suggested in this report are in respect to the recipient’s time zone. 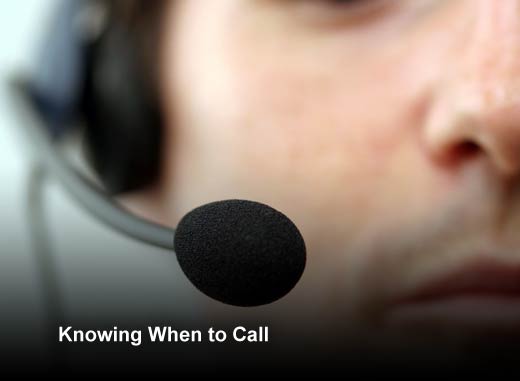 Knowing When to Call

Click through for more on how to set a more productive call strategy, as identified by ThinkingPhones. 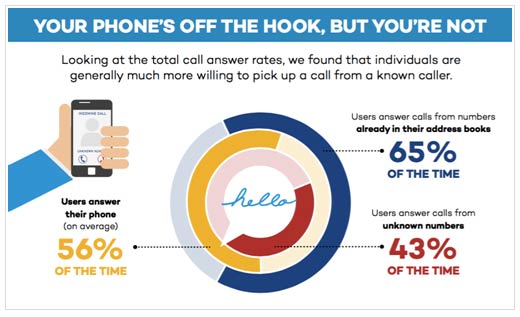 It’s a rule of thumb that most individuals are generally much more willing to pick up a call from a known caller. Looking at the total call answer rate, users answer their phones 56 percent of the time on average. If you are already in your contact’s address book, users will pick up the phone 65 percent of the time. If not, there’s still a chance that your call will get answered even if you are an unknown contact. If that is the case, then users will pick up the phone 43 percent on average. 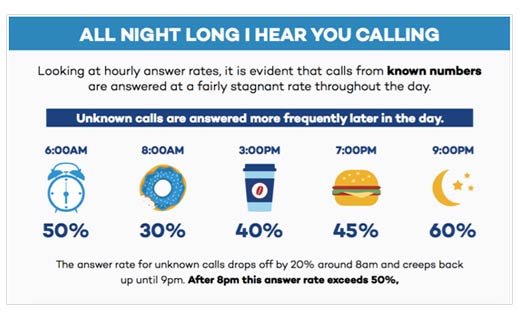 While individuals are generally much more willing to pick up a call from a known number, unknown calls are answered more frequently later in the day – rather than earlier. If you need to connect with someone and this will be your first interaction, the survey suggests that the optimal time to connect would be around 9 p.m. If you’re looking to avoid an unanswered call, aim to schedule any calls after 5 p.m., as that individual is more likely than not to pick up from an unknown number. 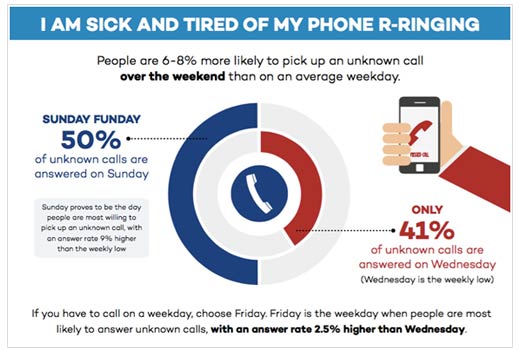 Weekday vs. Weekend for Unknown Calls

ThinkingPhones findings revealed that people are more likely to pick up a call from someone unknown over the weekend than on the weekdays. One day to avoid altogether would be Wednesday – a user is least likely to answer a call in the middle of the week. If you want to maximize your coverage area and gain a connection, Mondays and Fridays are the best time to make calls as users are most likely to pick up the phone at both the start and end of the week. Above all, Sunday proves to be the day people are most willing to pick up an unknown call – answer rates are 9 percent higher than the weekly low. 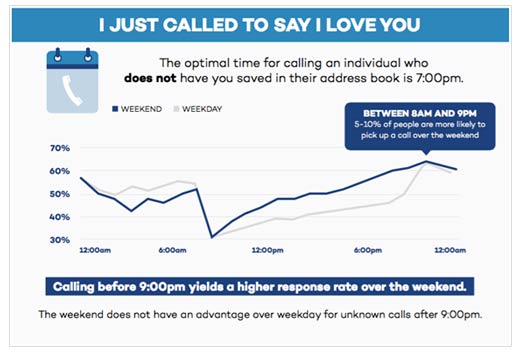 Optimal Times for Weekdays and Weekends

When looking at the entire week, the hours between 8 a.m. and 9 p.m. on the weekend are the most optimal with 5 to 10 percent of people more likely to pick up the phone. However, at 9 p.m., which is the most optimal calling time for unknown calls, the weekend does not have a huge advantage over weekdays. If you’re calling before 9 p.m., the weekend will yield you a higher response rate. If you are looking to call someone in the Northeast, efforts should be focused on calling in the morning or early afternoon to ensure that your call will be answered. Additionally, the findings show that people on the East Coast answer more frequently than those on the West Coast. When it came to daily calls, the East Coast answered at a higher rate on every day of the week. More specifically, between the hours of 5 a.m. and 2 p.m., people on the East Coast pick up at an average rate of 8 percent higher than the West Coast. 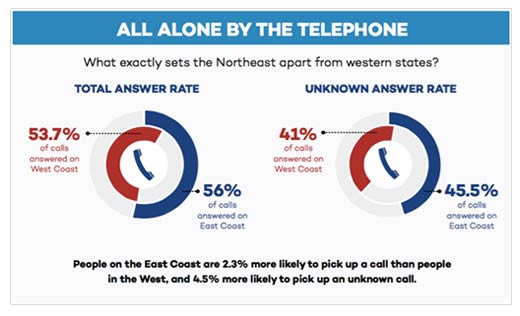 When ThinkingPhones broke down the data by state, four out of the five higher answer rates were from states located in the Northeast. For unknown calls, people in the Northeast are much more likely to pick up the phone than people in the West by 4.5 percent – so be sure to take a closer look at zip codes when you’re building your calling strategy. Geographic location, as it turns out, can be used to your advantage.