Box.net Partners with GoodData for Analytics

As a continuing sign of the growing maturity of Box.net as a platform in the enterprise for sharing content, GoodData today announced that it has partnered with Box.net to deliver a set of analytics services in the cloud that specifically monitor usage of the Box.net platform. 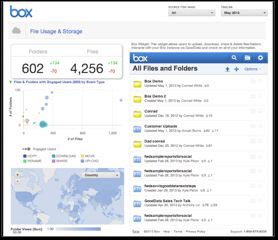 According to Cody Crnkovich, vice president of business development for GoodData, enterprise IT organizations are trying to not only track how many people are using Box.net to share what kind of content, but also patterns in that content sharing that might be indicative of a compliance breach.

As a software-as-a-service (SaaS) application in the cloud, IT organizations don’t generally have a lo

t visibility into the Box.net platform. But because Box.net has a clean set of application programming interfaces, GoodData can invoke those APIs to apply its analytics engine, also delivered as a service, to Box.net data in the form of a service called GoodBox.

Rather than build its own analytics capability, Crnkovich says Box.net chose to ally with GoodData because while Box.net could develop its own analytics, the odds that those analytics would be as rich or deep as a vendor that is totally dedicated to analytics is slim.

Longer term, Crnkovich says customers should expect GoodData to provide similar analytics capabilities across multiple SaaS applications, which many IT organizations are now trying to mash together to create a series of federated workflow processes in the cloud. The irony of this trend is that many of these applications initially found their way into the enterprise as a “shadow IT” service that end users decided to adopt on their own initiative. Now internal IT organizations are emerging as brokers that manage access to those very same shadow IT services.

Of course, before the next level of SaaS adoption can really occur across the entire enterprise, the first thing most enterprise IT organizations simply need to know is who is using what data when and for what purpose.